The road to my 2009 BMW 335xi. I have been looking off and on for a new car for the past year or so. Originally, I was aiming for a c6 Corvette and keeping it as a 3rd car strictly for fun. As time passed and I had time to think about things, having 3 cars in the family was not the best idea. Mostly because we don’t have the space. I began looking at BMW’s, at first the 1 series BMW’s. However, I soon realized 2 doors would not cut it if I had to haul kids around.

Next up on the list, 3 series sedans with slush boxes and manual paddles. These cars are kid friendly yet still fun in sport mode. I have been watching the used and dealer market for the past 6 months or so, waiting for something to show up that met my requirements. Losing my patience, I was about ready to give up until next summer. Then, I saw a 2009 BMW 335xi that was fully loaded, had the M-sport package (rare!) and the exact color combo I like. I was upset when the seller told me it was pending sale. I began looking at other cars and was really close to buying a monaco blue 2007 335i.  Surprisingly, I got an email from the seller of the 335xi. He said the car was back on the market!

I talked to the buyer and found out the car had some Dinan modifications done to it as well. So, I went to look at it as soon as I could. This car is exactly what I wanted in a BMW; Alpine White, Premium pkg, Cold weather pkg, M-Sport pkg, Navigation, and black leather interior. In addition, the seller added some great modifications including BBS 19″ RGR wheels, Dinan stage 2 DME upgrade and suspension upgrades, Dinan exhaust, and Dinan upgraded oil cooler. All things that I would have done to a stock BMW 335. I went after the opportunity. Test drive, inspection, done. Needless to say I bought the car and I am loving it. This car is amazing! Enough talk, onto the pictures, you can see them all in my BMW 335xi album. 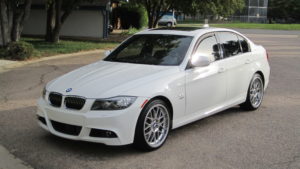